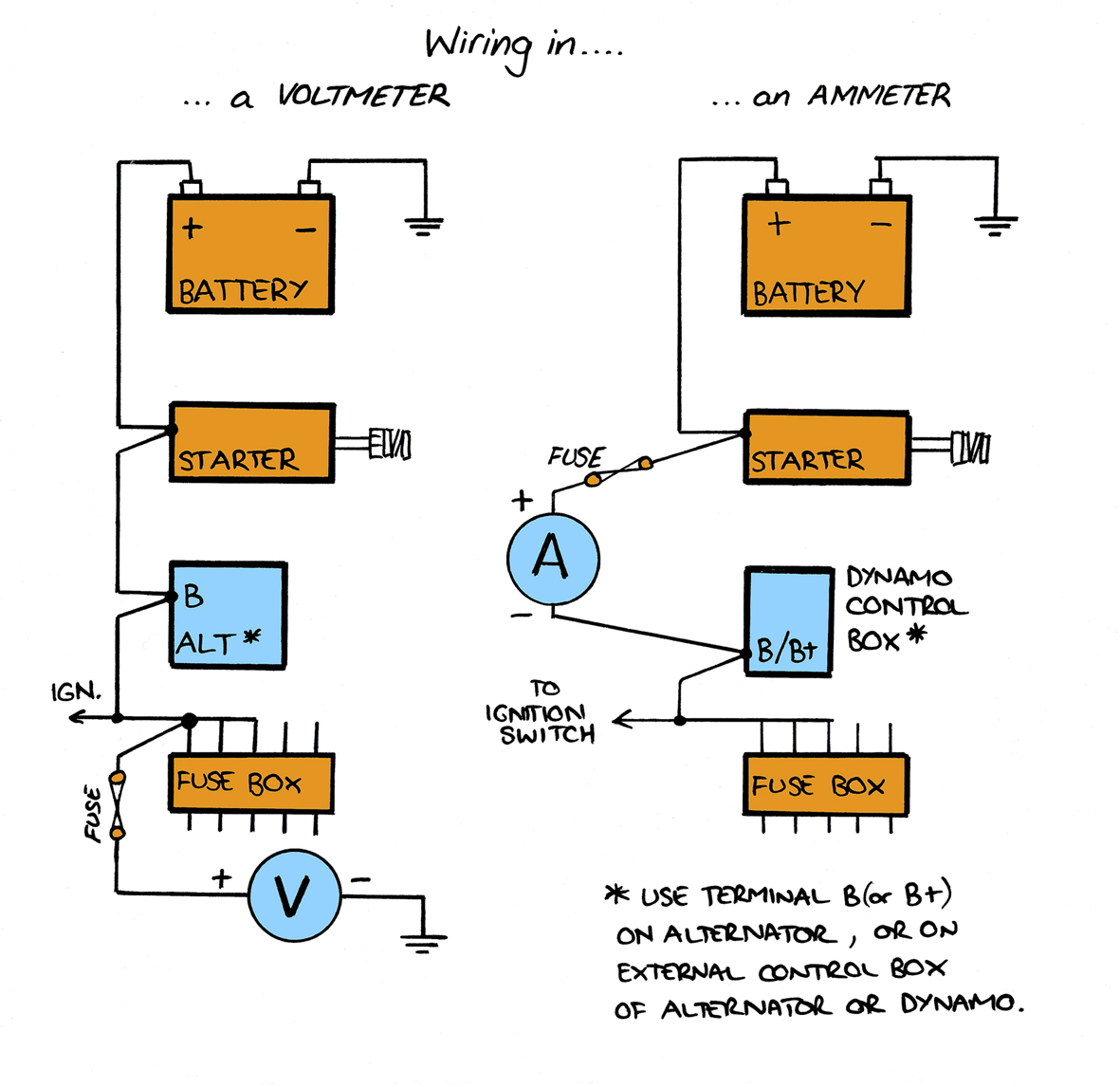 Before fitting a voltmeter or ammeter to your classic, there are a few things you need to know.

Any car fitted with an alternator is best suited to a voltmeter. The alternator charges adequately under almost all conditions and the voltmeter can simply be used as a cursory check of the regulated charging voltage and, with the engine stopped, the approximate condition of the battery.

Expected readings should be 11.5-12.5V with the engine stopped and the ignition on. This should rise to 13.5-14.5V when the engine’s running above tickover. Subtract up to 1V with the headlights on. If the voltage drop is greater, check the security and cleanliness of all major positive and earth connections to the battery, body and fuse box. Allow a minute or two after starting the engine from cold to allow the readings to stabilise.

A dynamo is a much less efficient charging device, so a car so equipped will benefit from an ammeter. This will give an instant indication of whether the battery is charging or discharging at any time. As a general rule, the dynamo doesn’t supply any current on tick-over. With the ignition and all current-consuming devices switched off, the reading should be zero. With the engine off but the ignition on, it should show a 0-10A discharge. Switching on the headlights should show a further 10A discharge. With the engine running at mid-rev, it should show a charging current of +10 to +20A, slowly dropping to 1-2A and remaining there as long as the revs are maintained.

Fitting a voltmeter is simple. Using 3A wire, earth the negative terminal to the bulkhead and run the positive wire to the main input point on the fuse box (place an in-line fuse of 1-3A near the fuse box end). If the meter is illuminated, use a Scotchlok-type connector or piggy-back spade terminal to splice the lamp into the instrument light circuit behind the dash. If the lamp has two terminals, earth the other one to the dash or bulkhead. If there’s only one terminal, then it shares the earth with the instrument itself.

Fitting an ammeter requires some care. It’s not wired directly to the battery, because the hundreds of Amps drawn by the starter motor would burn the meter out. The battery positive lead is usually connected to the starter. From here, a wire or wires lead to the fuse box and/or dynamo regulator. The ammeter needs to be inserted after the starter and before these other connections.

You’ll need to use thick wire of at least 25A capacity both to and from the ammeter. Be especially careful that the wires are protected from chafing and kept away from sharp edges, as a short-circuit may well cause a fire. It’s a good idea to fit a 100A fuse just after the starter. This should not blow in normal use, but will protect against a dead short. Wire the backlight in the same way as for the voltmeter.

If the car is 6V, then double the expected currents on an ammeter and double the capacity of the wires. For positive earth, reverse the positive and negative connections of both ammeters and voltmeters and make sure the casing isn’t connected directly to the negative side. You can check this by connecting a multimeter on the 200 Ohm setting between the negative terminal and the casing. It should give a reading of infinity (shown as a ‘1’ on the far left of the display). If they are connected, you’ll need to make sure the meter casing cannot touch any metal part of the car body or dashboard, perhaps by mounting it on a separate, plastic bracket under the dash.